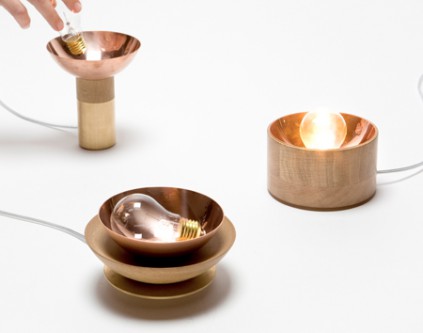 Born in Madrid, his take on design is based on a highly sophisticated vision of what makes an object special. His designs are clean and elemental, but rich in experience and associations. The easy and relaxed look of his realizations is achieved through an intensive process of study and reduction.

After completing his business management studies, he begins his training in product design at the Instituto Europeo di Design (2000-01) in Milan and later graduates with honours from Central Saint Martins (2001-04) in London. His thesis project, the GLOW BRICK, is still manufactured and distributed by Suck – UK.

In 2004 he starts up his own studio in Barcelona where he designs LA FLACA lamp, winner of the DESIGN PLUS AWARD (Frankfurt), and finalist to the DELTA Awards in Barcelona. LA FLACA is now produced and distributed by Metalarte – Spain. In 2009 he moves to Madrid where he also teaches at the Instituto Europeo di Design.

During 2011 and 2012 he conceived and developed the PET Lamp Project which –since its presentation at Rosanna Orlandi in 2013– has been a growing success that has enable him to create the PET Lamp Studio Society so that the project can reach even further. This Project is backed up by several prizes and nominations: nomination for the London Design Museum as best product of the year, CODESPA for best PYME (SME), the AD prize for Best Emerging Design Studio, nomination for the Delta Award 2014 and a nomination for the German Design Award 2015.

Nowadays he combines his work with different companies with the self-production of some of his designs such as HOME/OFFICE, PET LAMP, RAYUELA, CORNUCOPIA, CANDIL and the Copper version of LA FLACA. His designs can be found in renamed Galleries such as OA in Madrid, David Gill in London, Galleria Rossana Orlandi in Milan, SIM SUM – Madrid and GUGGENHEIM Museum- Bilbao.