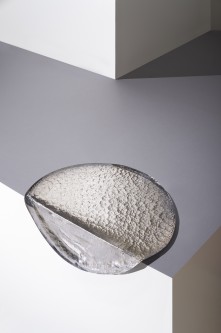 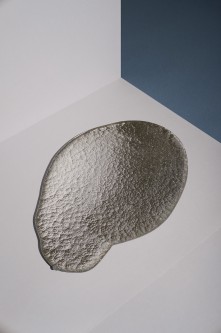 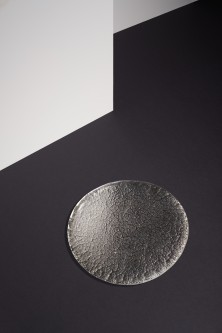 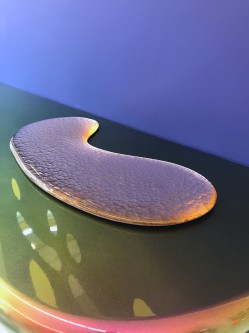 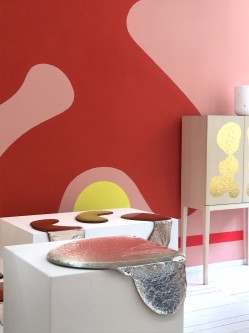 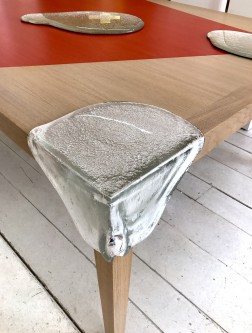 The glass works of the Specula series are part of a new exploratory practice by the Swiss artist and designer Philippe Cramer and are edited in a series of unique pieces by the Mobilab Gallery in Lausanne, Switzerland.
This production is made of poured glass, an ancestral technique that is nevertheless complex to carry out.

In this experimental context, the surprising structure of the lower surface of the glass element is caused by a thermal shock due to the metal plate on which it is poured. The molten glass is spread on a chilly steel surface to react and contract, generating a wave-like texture, thus contributing to the genesis of the work. Once the piece has cooled, it is silvered to create a shiny e ect, similar to a re ection of the sun setting on a sea of agitated water. It thus becomes a mirror distor- ting reality, a poetic and pictorial work that the spectator discovers and appropriates.

There are many references to this work. They evoke the dreamlike re ection of nature in Swiss lakes and refer by their title to both Max Ernst’s specular paintings and to « Specula Principum », the mirror of the Princes, which refers to political writings during the Middle Ages and the Renaissance and whose function was to instruct future princes to reflect on their responsibilities. The mirror of alchemy « Speculum alchemiae » in reference to the transformation of lead into gold (or silver) can also be mentioned, and thus makes the link with the world of magic.

The search for poetry is a constant in the work of Phi- lippe Cramer and this new emotional and sensual work is linked to his common artistic language. The Japanese « Yuugen » describing a consciousness of the Universe that generates sensations too deep and mysterious

for common words could perfectly correspond to this series. This term embodies and describes a love and respect for the present, past and future beauty of the contemplated element, as if the «life» of an object were part of its splendour with the transformations and modifications that time imposes on it.

These themes all refer to self-awareness: the viewer, as well as his environment, is reflected in this «mirror» in a modified, fragmented and constantly evolving way due to his ever-changing angle of view.

This series also pays tribute to craft practices that seek to revive a decorative dimension of art and reassess techniques that have been devalued or repressed by modernity. Glass pouring and silvering are part of the traditional production achievements, but have been abandoned in favour of industrial technologies devoid of emotion induced by a constant search for aesthetic perfection.

In contradiction to the established dogma concerned with concealing the witnesses of life, Philippe Cramer works raw materials in a poetic way to revive their nature and sublimate them.